It Isn’t Time for That Caring For Animals Isn’t What I Do, It’s Who I Am

Until I had a baby, my boobs were fun! They gave me curves, looked great in my tops/dresses/swimsuits and they probably enjoyed resting nicely in pretty bras from stores like Victoria’s Secret. But, when I needed them most, when they actually had to be put to use; they were worthless! I prepared for this, I swear I did; I read all the books on breastfeeding, even attended a class on it. I knew all the positions and techniques, but I still struggled. My baby had a great latch, we talked with several lactation consultants in the hospital and I went home feeling rather confident about my abilities to breastfeed. But then, it all changed! I quickly found out that when it came time to put my “girls” to work, they just weren’t having it. About a week after coming home from the hospital, I started to feel pain, burning and I even saw blood when I nursed; these were things I’d never read or learned about in my books and classes. I am bull headed in some ways, so I was not going to let a little pain get in my way; finding a way to get my son the breast milk was my number one priority, primarily because of the health benefits.

My struggle started with the burning I felt during my “letdown”. This was also rather shocking to me because even though I was fairly educated on the topic, I was not prepared for this. When my body would make milk, it would actually burn and tingle in my boobs really badly (not fun), usually followed by a nice flow of milk that soaked my shirt. You would think this would be a good sign, but it would happen at the most inopportune times; like when Mason would start crying in a store, or if  I saw a cute baby on TV; hormones are amazing things and they’r really revved up at this time I guess. I called my lactation consultants (who were now on speed dial) and they said it was pretty normal. I guess my body produced too much milk and this was a side effect of doing so. Go figure, I would produce “too much” milk…some women can’t make enough, but oh no, not me!

So I got used to the letdown pain (and took care of the leakage by wearing breast pads in my bras), but a week or so later I started to notice other pain along with having the chills. I had a fever and my boobs were HOT (not the sexy hot) and painful. After a trip to the OB I found out that I had mastitis, 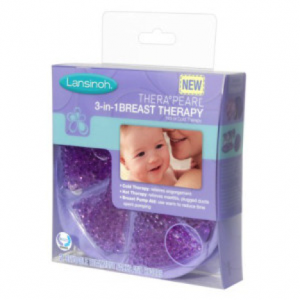 which is a bacterial infection of the breast tissue, typically caused from breastfeeding. Great! I was put on an antibiotic and told to put ice packs on my breasts (it actually did feel great!) and I did start to feel much better. My husband actually did some research and found that you’re supposed to put cabbage leaves on your breasts to help ease the pain…I did this, but it was very strange and I can’t say it really helped at all.

My next hurdle was cracked nipples, they pretty much split right down the middle, were very sore and bled very badly. It got to be so bad that one time Mason spit up (he spit up a lot) and it was the color of Pepto Bismal! (WHAT?!) I rushed him to the doctors office and they said the blood was coming from me, not him. So, I aggressively applied Lanolin after each nursing session and we kept going.

About two weeks after this was when I hit rock bottom, every time Mason would latch on I would feel as though a hundred needles were being pushed through my nipple. The pain continued to get worse, and things like wearing a bra or standing in the shower…forget it! Anytime my nipples touched anything I was in pain, to the point that tears would roll down my face as I nursed my hungry baby. I learned that this was the result of a yeast infection on my breasts. There were no signs and the only symptom was some redness and the obvious pain. So I put anti fungal cream on my boobs (yep, the same stuff you put on athletes foot…gross!!!!), took another prescription and kept plugging away. Then the whole yeast/thrush thing happened again about a week later and I broke down.

I felt like such a failure! In the old days, mom’s didn’t have a choice, they had to push through it if they wanted their baby to eat. I kept 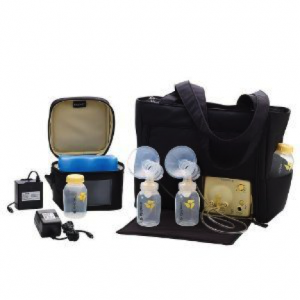 saying to myself, if this was 500 years ago, would I just let my baby go hungry? Was I weak? What was so wrong with me that I could not do something so natural as breastfeeding my baby?!? But I was not going to give up, that’s just not what I do! So, I my Medela Breast Pump became my new best friend (or enemy).

At first I pumped just a few times per day and tried to let him latch on for the other feedings and this worked for a while, but it was still painful to let him nurse. So I started exclusive pumping and my pain eventually went away. I decided that the whole breastfeeding just wasn’t going to work for me, but as long as my baby was getting breast milk, it didn’t really matter how he was getting it.

It turns out that my journey is not uncommon and women go through these things all the time, but the books and classes don’t do a good job of explaining it. These said books and classes actually make you feel terrible about NOT breastfeeding or choosing to stop. Everyone is different and I wanted to keep going, I really did, but I just couldn’t. And why put myself through all that pain when there was another way. I was fed formula pretty much from day one and I’m fine! There’s no shame in making the choice to stop breastfeeding, especially when it was affecting my quality of life so much.

I ended up exclusively pumping (about 6-8 times per day and through the night) until Mason turned 6 months old – watch for a post on this soon from Lauren. And just as Lauren wrote about a couple weeks ago, you will feel Mom Guilt for everything. I felt so guilty when I decided that I was going to stop pumping and give my baby formula, but to be honest, Mason thrived once I gave him formula. He grew so much and was so much happier (we both were). I no longer had to haul my pump with my to the mall and sit in Nordstrom’s (fancy) bathroom and pump, just so I could get out of the house for a few hours (its the little victories in life)!

I wanted to write this post to let other moms out there know that it’s alright to call lactation consultants or your doctor if you are having trouble; its actually a great idea, even if things are going well! It’s alright to pump and it’s even alright to “give up” if that’s what works best for you and your baby. I would have never thought Mason would be happier on formula, but he was! So don’t beat yourself up about things like this, I know how you feel and being an exclusive pumper deserves some king of award (I think).

So keep on keeping on with whatever works for you and stand by the fact that you’re doing the best that you can! And if your “girls” aren’t happy when you put them to work, fine. Let them “go back to normal” again and have fun!

Rest Now or Pay Later: Importance of a Sabbath Day

My Most UNEXPECTED Reaction to Becoming a Mother

I’ve recently, in the past year, done a 180 with my weight. I get emails a... END_OF_DOCUMENT_TOKEN_TO_BE_REPLACED

A little more than a year ago, I left my “cushy” job in corporate to... END_OF_DOCUMENT_TOKEN_TO_BE_REPLACED

My Dad Died 8 Years Ago, But He’s Still Teaching Me Life Lessons Today

Ever since I was little, I wanted to build a business/brand/invention/something&... END_OF_DOCUMENT_TOKEN_TO_BE_REPLACED

I feel like these two things do not go well together. Anybody else? Havin... END_OF_DOCUMENT_TOKEN_TO_BE_REPLACED

I have struggled with other people’s assumptions my entire life. I remember bein... END_OF_DOCUMENT_TOKEN_TO_BE_REPLACED

Love and loss, highs and lows, ups and downs. All of these are part of life, but... END_OF_DOCUMENT_TOKEN_TO_BE_REPLACED

Upon leaving the consultation for a breast augmentation, I was consumed w... END_OF_DOCUMENT_TOKEN_TO_BE_REPLACED