I was a first time attendee at BlogU last weekend in Baltimore. When I checked in, the guy at the front desk asked whether I was traveling for business or pleasure and I wasn’t sure what to say— obviously this is all very fun, but I also want to write for a living. I navigated this dichotomy by saying something along the lines of “I’m drunk right now!” 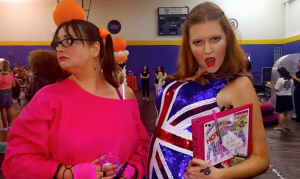 Thankfully I’d been driven there by McCall of the Wild, a kind soul who had the misfortune of trusting me with her GPS and who answered “no, it’s okay” when I offered to shake my fist at someone in the parking lot.

I quickly met up with a slew of strange people I’ve been talking to on the internet for the last 18 months. I was hoping some of them would prove to terrible humans so I wouldn’t feel bad blogging about them.  But unfortunately for my blog fodder, they were all badass and wonderful.

Being back on a college campus was a little weird, since I associate that time of my life with depression and loneliness. Thankfully the only time I felt that way was when I wandered around the dorm hallways at 1AM looking for “friends to have fun with” and was pretty sure everyone was hiding in their rooms enjoying contraband without me. Turns out they were doing what sane people do at 1AM, which is sleep.  The next morning they got to wake up to messages and Snapchats like “hey why you no like me?”

I was told to prepare an el 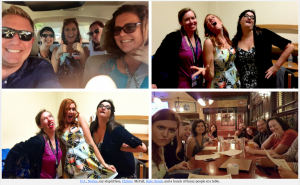 evator pitch about myself and my blog. Thankfully I never had to actually use it because the conference was so small it felt like I already knew everyone. For those people I forced myself upon without the warning of an elevator pitch, I am truly sorry. I was too busy talking about underwear and trying to remember the Hail Mary prayer to tell anyone about my niche.

A lot of hugging happened, which is strange for a girl who didn’t learn how to hug until she was 24 years old. I used to let people think I had some sort of personal space issue and didn’t like to be touched. The truth was I didn’t know how it all worked— You press your body up against another body? Which parts are supposed to touch? Is there anything I shouldn’t touch? How long does this touching go on?

In addition to getting lost, watching Chrissy bleed, and taking offensive photos with Jeff’s bizznass cards, I did actually learn a few things. It turns out Jen Mann is a freaking boss who tells it like it is– with no fluff or bullshit. She walked us through her entire process of writing a book and how she navigated getting published and finding an agent. She even topped it off with an obscene hand gesture.

Not getting this on video is my biggest regret from the conference.

There were so many people I finally got to meet— like Samantha from Scary Mommy who is so kind when she both rejects and accepts my submissions. (She also made me feel less disgusting about the fact I live in a flea infested home.) I’m hesitant to admit that I roomed with Jana from Stop Me If I Told You This because now she knows all my secrets and has seen how neurotic I am right before I pretend like I have self confidence and any clue what I’m doing.

I could go on forever about all the ama 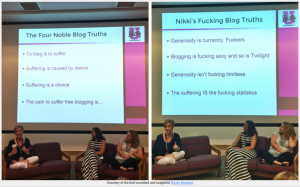 zing people I got to hang out with, but I don’t want to lose you on a TLDR because I’m just about to get to the good stuff. Behold, I give you the overall takeaway from this weekend: Do Yo Thang and Be Generous With Each Other.

It’s tempting to try and copy whatever’s working for someone else, or to modify your own style in order to become something you think more people will find appealing. We need to cut that shit out. Every single one of us has something to offer by virtue of being the only one with our story and our way of seeing the world. Stop second guessing yourself. If you want to say “fuck” say fuck. If you want to say “bag of cunts,” that’s okay too. Especially if you’re Nicole Leigh Shaw  and/or a dolphin.

It was repeatedly said that “a rising tide lifts all boats.”  Bloggers– and people in general– need to stop viewing each other as competition and realize the value of finding your tribe and building each other up.  The reason this weekend was so damn fun (despite occasional social anxiety and “oh my gah does anyone want to sit with me” moments in the cafeteria) is because these are my people.  The value of that is not lost on me and I plan to work harder at making sure I’m contributing something towards that rising tide.

Bloggers– and people in general– need to stop viewing each other as competition and realize the value of finding your tribe and building each other up. 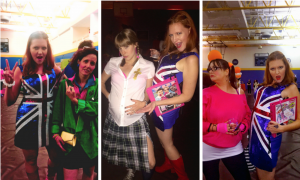 After this weekend, there are a lot of photos on the internet that will probably prevent me from being employed at some point in the future. Speaking of employment— I apologize to everyone who casually asked where I’m from and had to listen to me stumble over some sort of vague and ambiguous answer. I try to conceal my location so as not to get fired (though I’m sure I will still be fired eventually). It makes me feel deceptive, and I don’t want to lie to you because you’re all my favorite people. Someday when I’m finally terminated or incarcerated and my workplace makes the news for all it’s bullshit, they will make a Wikipedia page about me and it will list my birthplace and we can all laugh about the good old days when I thought I could keep a secret.

For those of you who were there this weekend, it was awesome to meet you and/or stare at you awkwardly from a distance because I was too intimidated to approach you. If we didn’t get to meet then that’s a damn shame and we will need to rectify this first thing at BlogU16. For the rest, I need you to do one of three things:

1. Come to BlogHer in a month.  I should be there because I’m not pregnant with an alien/don’t have cancer.  Huzzah!2. Come to BlogU next year.3. Send me your address and stock up on Nutella. I’m coming to visit and I can’t bring my own jar because the TSA confiscated it, those bastards. 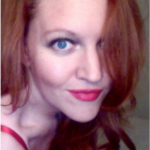 Aussa Lorens is author of the blog Hacker.Ninja.Hooker.Spy. where some mistakes are too good not to share. Her work has been featured on Cosmopolitan, The Huffington Post, Thought Catalog, Narrative.ly, and Scary Mommy. She is a BlogHer Voice of the Year Readers Choice Award and an Indie Chicks Badass Blog Award winner for 2014 and 2015. You can find Aussa on her blog, AussaLorens.com, on Facebook, or Twitter: @AussaLorens.

Being a Twin with Twins: What It’s Really Like

Double the Blogs, Double the Fun, Except Maybe for the Husband

I have struggled with GERD (gastroesophageal reflux disease) and LPR  (laryngoph... END_OF_DOCUMENT_TOKEN_TO_BE_REPLACED

What is it really like to be me? Often times I wonder, does anybody care? But th... END_OF_DOCUMENT_TOKEN_TO_BE_REPLACED

This is so much gooey awesomeness that combines peanut butter, oatmeal, caramel ... END_OF_DOCUMENT_TOKEN_TO_BE_REPLACED

Ok yes, I knew I was a twin my whole life, but for the first 33 years, we were t... END_OF_DOCUMENT_TOKEN_TO_BE_REPLACED

We recently moved and inherited a dining room with white/cream colored carpeting... END_OF_DOCUMENT_TOKEN_TO_BE_REPLACED

When My Pastor Said “Follow Jesus”, Did He Mean on Social Media?

At church, my pastor, David Chadwick, was giving his awesome sermon and he was t... END_OF_DOCUMENT_TOKEN_TO_BE_REPLACED

I like to think of myself as a friendly person. I like the idea of knowing my ne... END_OF_DOCUMENT_TOKEN_TO_BE_REPLACED

I Chose to Love

This past Friday was a huge day. In case you’ve been without any sort of c... END_OF_DOCUMENT_TOKEN_TO_BE_REPLACED