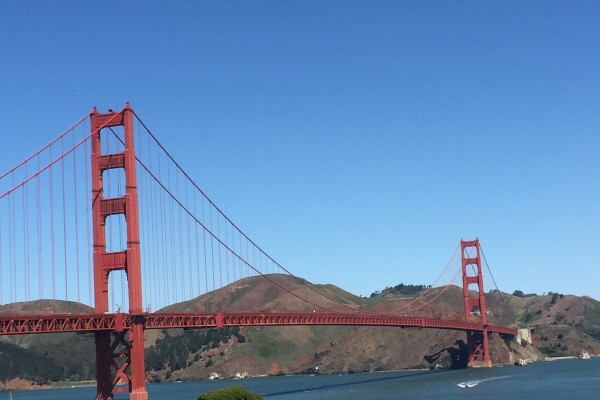 If you follow me on social media, you probably know that I recently went to San Francisco with my husband, Mitch, to celebrate our Anniversary and my 30th birthday. We left our toddler at home with Nana and took our first “getaway” without him. I felt guilty for leaving him, but we had a great time! For what we did while in California, I would not recommend bringing a toddler, or even young child, but it’s up to you and how you feel about the word “vacation” (lol).

While in California, we visited San Francisco and Napa Valley, but I am only going to focus on the stay in San Francisco right now…my review of Napa will come later. We arrived at about 8:30 pm, got our bags, and arranged for an Uber driver to pick us up. If you aren’t familiar, Uber is an app that allows you to have “private driver” pick you up and take you to your destination. We love Uber because it shows you exactly where the driver is when you request the pickup (so you know the wait time) and it calculates the cost of the trip before you even get into the car; for San Francisco, it was great! We actually did something called “UberPool”, which is only available in larger cities, but it basically means you are requesting a driver to come and pick you up from your location but you are carpooling with other riders. This brings the cost down and we never paid more than $15 (most of the time it was less than $7) to get from Point A to Point B. I’d REALLY recommend using Uber because Taxi’s are much more expensive and the drivers aren’t nearly as friendly. 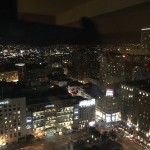 We stayed at two hotels while in San Francisco, both were in Union Square. I loved both of our hotels and would recommend them. (If you’re wondering, we stayed in two because we went to Napa in the middle of our trip and spent on night there.) The first hotel we stayed at was called the Grand Hyatt. It had a nice lobby with a pretty friendly staff, a nice little bar and restaurant, and our room was very nice too, with a great view of the city (we were on the 24th floor).

Our first day, it was about 85 degrees outside so we decided to take an Uber down to Fisherman’s Wharf, walk around, and then rent bikes to ride across the Golden Gate Bridge. The bike rental spot, called Blazing Saddles, was great and the people wer 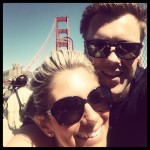 e helpful, but they did not quite tell us the intensity of the hills we were about to ride up. Now, Mitch and I are both pretty athletic (#humblebrag), but DAMN! some of those hills were pretty steep! I would recommend taking a spin class (or two) to prepare if you know you’re going to do this when you visit! When you do this whole bridge/biking adventure, you ride bikes over the bridge and then take the ferry back (FYI, the bike ride is about 9 miles one way). Nobody told us how steep the hill would be on the way from the bridge to the ferry. Mitch did fine with this, but I was very nervous about it. There is a very little shoulder on the road and although it’s downhill, it’s pretty steep and uneven; so be careful! Overall, it was a fabulous experience! You could see Alcatraz and the entire city, I would 100% recommend it; just be ready for those steep hills! 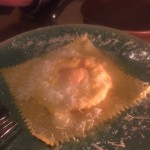 really good! It was a really cool place FILLED with people. Then, we went back to Union Square and took advantage of all the shopping! That night we went to an event at General Assembly San Francisco where I represented WIRL Project and met some very successful people including David Mitroff and Josh May. We got some great feedback about WIRL Project, which is something to be proud of considering San Francisco is basically the “Tech Capital”! Anyway, after the event, we had reservations at Cotogna, a very yummy Italian restaurant – the Mushroom pizza was our favorite, but we also had the Lamb Shank and a massive Ravioli (right)! Yum!!

The next morning we ventured off to Napa, which I will write about later, but I do want to discuss how we got there. We took an UberPool form Union Square to SFO airport and rented a car for about $15/day (compared to the $150/day in Union Square). The UberPool cost $15 each way, so it was still a muuuuuch better deal to go about it in this way. 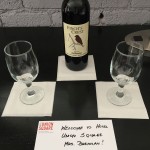 We came back to San Francisco the next afternoon and stayed at Hotel Union Square and were upgraded to a suite for my birthday (yay!!). They gave us a really good bottle of wine and a little note, very nice! Our room was very “boutique”ish and I LOVED it!!! It was right down town and a great 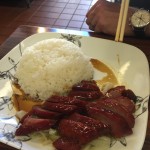 location. We walked from here to Chinatown to get some authentic food; most might not want to do this, but Mitch being from Australia loooooves some good authentic Chinese Pork/Duck…so we gave it a try. It was REALLY good and we actually went back for more the next day! For the rest of the time, we just walked around, did some sight seeing, and some shopping! On my birthday, we went to Sift, a cute little bakery for some cupcakes, they were delicious! Although the city is super busy, it was somehow a very relaxing trip for us…probably partly because we didn’t have our sweet toddler with us.

We took the “red eye” flight home and arrived in time for Mitch to head off to work on Monday morning. We had a great time out there on the West Coast and loved the humidity free weather (although it was a little chilly compared to Charlotte, NC). I left out quite a few details, so let me know if you’d like to know more. If you are considering traveling to San Francisco, California anytime soon, feel free to ask me for advice. Hope you enjoyed this post and found it helpful! xo

Hello my name is Michele Barrett. I have been a stay at home mom for the past 9 ... END_OF_DOCUMENT_TOKEN_TO_BE_REPLACED

I have always been very goal oriented. I LOVE setting goals and reaching them. O... END_OF_DOCUMENT_TOKEN_TO_BE_REPLACED

Happy Thursday, everyone! Not for me, though. I think today sucks balls. And I t... END_OF_DOCUMENT_TOKEN_TO_BE_REPLACED

Raising Chickens For The Beginner

Raising chickens is a crazy and weird experience. Or Maybe it was just the way I... END_OF_DOCUMENT_TOKEN_TO_BE_REPLACED

It’s hard to believe that 4 years ago I knew pretty much nothing ab... END_OF_DOCUMENT_TOKEN_TO_BE_REPLACED

My acne was only skin deep. My skin won’t stop me because beauty is both i... END_OF_DOCUMENT_TOKEN_TO_BE_REPLACED

I’m not exactly sure when it happened, but sometime in the past few months I rea... END_OF_DOCUMENT_TOKEN_TO_BE_REPLACED

Do you know the REAL reason that American’s celebrate the 4th of July? We&... END_OF_DOCUMENT_TOKEN_TO_BE_REPLACED