Pregnancy and Anxiety The Harsh Reality of Going Home: Michael Carter-Williams’ Story of Life On and Off the Court 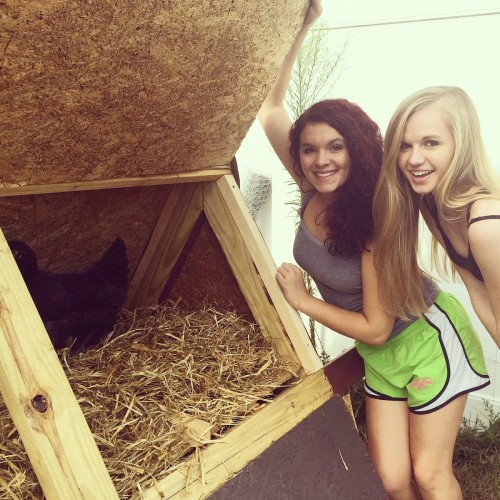 Raising chickens is a crazy and weird experience. Or Maybe it was just the way I did it?

On the second week of school, it was announced that each student in my Horticulture class would have to do an SAE (supervised agricultural experience) project. It took me a few days to think about what I would do…whatever it was needed to be cool, take up 15 hours of my time, not cost very much, and also (eventually) pay me in return. At first I wanted a pig. I was ecstatic at the idea and I couldn’t wait to finally have an excuse to get a piglet of my own! But, unfortunately, that plan failed.

One day, while sitting in class, the girl who sat in front of me (who would later become my best friend), turned around and asked if I wanted to be partners. Now, usually I’d reject partners, as I’d rather work alone, but something drew me to her. She seemed to be just like me. I liked that.

After a week of classes with her, I knew that we should probably start to plan and prep for the project.  So, I asked Jillian if she would raise chickens with me; I asked if she would like to be the mother of my hens. I think that the question got her attention…  I mean what would you say if someone asked you that? … I knew it got her attention. After that we were inseparable and ready to plunge into this whole “parenthood ” thing.

After 7 trips to Lowe’s, four emails to different chicken sellers, hours of Google searching for types of chicken housing, and blood sweat and tears, we finally had the chicken coop done and were ready to bring home the babes! On October 4, 2014, Jill and I took a trip to Concord, NC, in the middle of nowhere, to buy 6 Australorp hens. This should have been easy… all we needed to go was get out and grab them, right?

These chickens were hell on two legs, with wings! Our first mistake was bringing a storage bin with a hole in it to put the chickens in. It barely fit in the car and they easily stuck their head through the top. All six chickens were put into the bin, we paid our $24, and drove off. On the way back we knew we needed food and hay. So we stopped by Renfrow’s Hardware. Is it just me, or should there be an announcement that Renfrows, and almost every other place that sells chicken food or hay, is closed on Saturday? I was not a happy camper. Eventually we found somewhere else to get food, but by then the car stunk to the high heavens and the smell was over bearing! Who knew such a small chicken could poop so much?

Finally Were home,  two grueling hours later, with six chickens piled in the back… all still fully alive. We then put them in the coop, and the rest was simple. Everyday someone checks on them, gives them food and water, and that’s all there is to it. The hardest part, by far, was getting everything set up and actually getting the chickens. Now, it seems like I stressed over absolutely nothing.

So, if you’ve ever considered, or wanted, your own chickens, take it from someone who knew absolutely nothing in the beginning….  It’s simple, It’s easy, and it’s doable.

You don’t have to know anything about chickens, or any animal for that matter, to own your own chickens. They are kind of like a fish. As long as you feed them, they will live.

Outdoor Design with Baby in Mind

PLEASE! Do your research!

Caring For Animals Isn’t What I Do, It’s Who I Am

The Greatest Gifts are Small Packages Wrapped with Love

Have you ever felt like you were doing something just to be doing it but you rea... END_OF_DOCUMENT_TOKEN_TO_BE_REPLACED

I Just Keep Telling Myself It’s Only Hair… But…

Sooooo, I tried to make an appointment with my stylist to have my hair shaped an... END_OF_DOCUMENT_TOKEN_TO_BE_REPLACED

Don’t you love when someone points out to a pregnant woman that she looks... END_OF_DOCUMENT_TOKEN_TO_BE_REPLACED

And The Winner Is…

A few weeks ago, we challenged our WIRL Project members to share their skin inse... END_OF_DOCUMENT_TOKEN_TO_BE_REPLACED

I started blogging a little over a year ago. In this time I’ve learned SO ... END_OF_DOCUMENT_TOKEN_TO_BE_REPLACED

So my mother is one of the hardest people to shop for in the history of f... END_OF_DOCUMENT_TOKEN_TO_BE_REPLACED

Does anyone have any recommendations as to where I can find affordable artwork a... END_OF_DOCUMENT_TOKEN_TO_BE_REPLACED

My Friend, Kymm McLean, is a makeup artist who I work alongside with in the wedd... END_OF_DOCUMENT_TOKEN_TO_BE_REPLACED