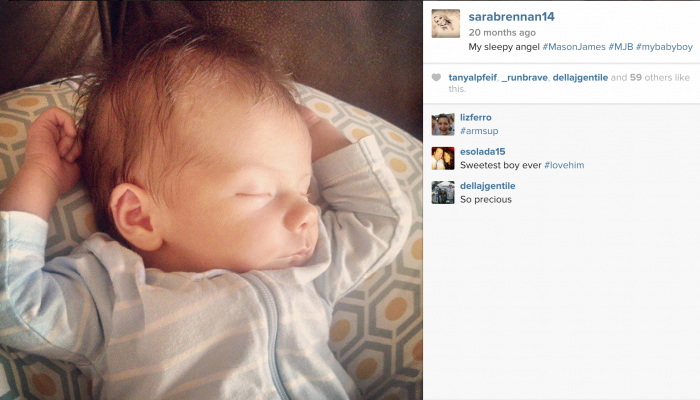 When I had Mason, I swore I wouldn’t be one of those moms who blasted social media with my baby’s photos. Even during my pregnancy, I’d share a “bump” photo every now and then, but tried to keep it to a minimum because, let’s face it, it can be annoying! So, when I had my new baby boy home with me and he was resting peacefully, I found myself taking a lot of adorable pictures of him. I wanted to share them, but I wanted to make sure I was doing it in an “appropriate” way so I came up with a few hashtags that I would use with each post (to Instagram) and was confident and excited about sharing my photos of my sweet little angel baby!

Although I LOVE social media, I wasn’t super knowledgable about how to use these outlets for things other than keeping up with friends. For example, I thought a hashtag (#) was just a way for me to keep track of my own photos…like organize them. So, I tagged Mason’s sweet baby photos with #MasonJames, #MyBabyBoy, and #MJB. Things were working out perfectly, until one day I accidentally clicked on the #MJB tag and I then realized why people used hashtags. I quickly learned that the tag takes all photos with that same tag and groups them together. Well, I did not know that Mary J Blige (MJB), the Grammy Award Winning “Queen of Hip-Hop Soul”, went by the hashtag #MJB… so, can you guess what was grouped in the middle of all these photos of this celebrity? Random photos of my little, precious Caucasian baby boy sleeping on my couch! He was amongst pictures and videos of R&B singers, rappers, MJB herself, etc. which was SO NOT what I was initially going for!!!

Although many of you probably had no idea that this even happened, I was so embarrassed for 1) Being so dumb when it came to social media and 2) “Tagging” my baby in such a WRONG group on social media. Although it may not sound that bad, but moms, especially new moms, are so caught up with emotions, guilt, fear, sleepless nights, etc. that this just rocked my world at the time (lol)! I felt so stupid and uncool! haha

So, next time you go crazy with your #hashtags, make sure you know what you’re getting into!

What It’s Really Like – The Story Behind WIRL Project

When My Pastor Said “Follow Jesus”, Did He Mean on Social Media?

Unsubscribing from Emails – Quick and Easy!

We all know how it works, you’re looking online for something and want more info... END_OF_DOCUMENT_TOKEN_TO_BE_REPLACED

Thank You Notes with Jimmy Fallon

Thank you, Jimmy, for being so entertaining! If you’re a night owl and ca... END_OF_DOCUMENT_TOKEN_TO_BE_REPLACED

So my mother is one of the hardest people to shop for in the history of f... END_OF_DOCUMENT_TOKEN_TO_BE_REPLACED

I had the privilege of knowing Andrew Hunter Murray. He was a very specia... END_OF_DOCUMENT_TOKEN_TO_BE_REPLACED

Happy Valentine’s Day to everyone at WIRL Project! Hope you have a wonderf... END_OF_DOCUMENT_TOKEN_TO_BE_REPLACED

We recently moved and inherited a dining room with white/cream colored carpeting... END_OF_DOCUMENT_TOKEN_TO_BE_REPLACED

Since becoming a mom, I’ve learned that there are NOT enough hours in a da... END_OF_DOCUMENT_TOKEN_TO_BE_REPLACED

Exercise As We Get Older

I recently started an exercise routine where I’m weight training and doing... END_OF_DOCUMENT_TOKEN_TO_BE_REPLACED

What Is It REALLY Like to Work in the Medical Field? Prompt: We want to hear fro... END_OF_DOCUMENT_TOKEN_TO_BE_REPLACED