The “Dad Bod”? Seriously? When Flying Makes You Ask: Are You Serious? 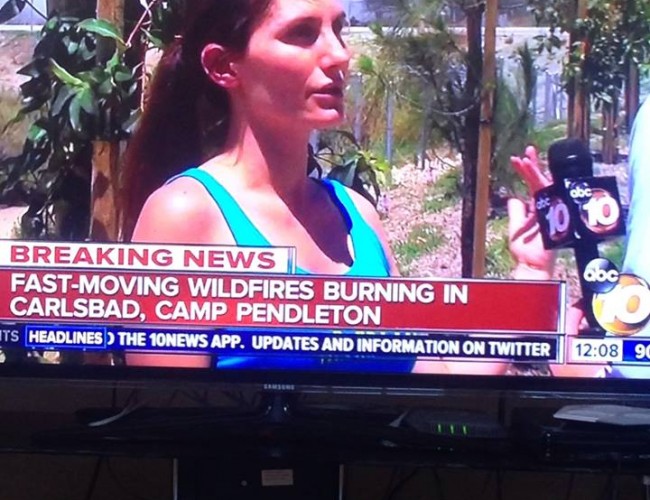 Today started like any other day. I took the kids to school, came home, and had my first workout in almost 3 months. After my trainer left, I sat down and 90 seconds later, my phone rang.

“The school has been evacuated, and all the children are being held at (blank). Please come get him as soon as you can.”

“What about my daughter?”

That was my first and last communication with the school for hours. I immediately hopped into my car, and started the 15 minute drive to get BOTH of my younger children. My oldest goes to a difference school, one which was not evacuated, so that gave me a little bit of comfort as I drove down the main road. I tried listening to music, but all I could think about was seeing the kids. I was so focused on the road ahead, that when I finally reached a stoplight and had a minute to look around me, I realized that everyone inside their cars and out had their smart phones pointed at the hills in the distance. I looked in the same direction, and that’s when I saw the enormous plume of smoke rapidly filling the skies. It moved fast and with purpose, and I feared what lay ahead. As my car traveled farther north, I started to notice all the surrounding cars being re-routed, and when I looked at the intersection 3 stoplights from the kids’ school, it was completely blocked off by police cars and fire trucks. Being horrible at navigating pretty much anything, I turned with all the other cars, and then turned on my GPS to find another route. But it made no difference; regardless of where I turned, I ended up being turned around by police cars & sirens.

Alas, I ended up back on the main road, upon which I had just attempted to circumvent, and decided just to pull over and gather my thoughts. As soon as I did, 5 men rushed to my car shouting, “Lady! Watch out! Embers are hitting the power lines directly above your car!” Could this day get any better? I moved my car forward, out of danger from the lines, and then started madly texting all the moms and teachers from school whom I could think of. The first part of the text was to tell them to get their children, and the second part asked if anyone could take mine, as well. Then, I waited. I waited for what seemed like an eternity, but turned out to be the longest hour of my life. Not to mention, I suffer from anxiety, so how I was able to stay calm through this is beyond me. And then, as I sat there, constantly reassuring myself that the kids were fine, I looked out my window and saw a woman standing alone, sobbing. There were several people out of their cars, but she was alone. I got out of my car and walked right up to her, and without saying a word, I wrapped my arm around her and let her cry on my shoulder. When she finally stopped, she explained that she was watching the fires surrounding the apartment complex where she lived, and she was devastated because she’d been evacuated so quickly, she had no family around and she had not had time to grab one single item. Absolutely nothing. She felt helpless and alone, and I wished I knew how to help her.

As we stood there, both waiting for very different things, it occurred to me that this perfect stranger – a woman I had never met, and would probably never see again, was helping me in ways that she probably never expected. And I would like to think that I did the same for her. And then, after several minutes, I received a text from a friend of mine that another mom had grabbed the kids and they were safe at the mom’s house and eating turkey melts. I couldn’t have been happier or more relieved. But as I got back into my car, I stopped, rolled down the window and asked the woman if she would like my number, in case she needed somewhere to go. I explained to her that, even though we were strangers, that didn’t change the fact that we are both people, and it’s important to help each other. She gladly took my number, and I hoped I would hear from her again.

…in times of need, we can and should do what we can to help each other.

I drove to the nearest gas station, and as I waited for the parents, also known as my heroes, to bring the kids to me, it occurred to me that in times of need, we can and should do what we can to help each other. Even a small gesture can go a long way when someone feels helpless and alone. When my kids finally came, I hugged them long and hard, and then went straight home. And an hour later, my phone beeped. It was Fergie – the lady by the side of the road. She had been able to go back to her apartment long enough to grab a few things, and her children were safely on their way to a friend’s house. She ended the text with a smiley face, and for a moment, it made all the chaos and sadness of the previous few hours seem like a distant memory.

My beautiful baby girl just turned one in March, and motherhood has force... END_OF_DOCUMENT_TOKEN_TO_BE_REPLACED

You’re Sinking Without a Desire to Swim

At least one person in your life has probably told you that you cannot fix the b... END_OF_DOCUMENT_TOKEN_TO_BE_REPLACED

Confessions of a Starbucks Barista

Who doesn’t love Starbucks? The coffee, the croissants, the sandwiches, th... END_OF_DOCUMENT_TOKEN_TO_BE_REPLACED

Two weeks ago at Thirty-One’s Leadership Council (where the top 25 women ... END_OF_DOCUMENT_TOKEN_TO_BE_REPLACED

Be Careful – and Thankful – What You Wish For

Years ago, while living a life that is very different than the life I’m ... END_OF_DOCUMENT_TOKEN_TO_BE_REPLACED

15 Days. Fifteen days that felt like an eternity. Having a child in the NICU is ... END_OF_DOCUMENT_TOKEN_TO_BE_REPLACED

Red Is My Favorite Color… But Not On My Skin

My blemishes are only skin deep. My skin won’t stop me because̷... END_OF_DOCUMENT_TOKEN_TO_BE_REPLACED

Why Most People Don’t Know How To Use Eye Cream

So I was kinda shocked when a few people I sold eye cream to, told me the... END_OF_DOCUMENT_TOKEN_TO_BE_REPLACED