SAHM & Business owner? Dating a Celebrity: What It’s Really Like 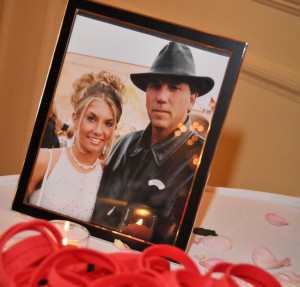 Ever since I was little, I wanted to build a business/brand/invention/something…but I never knew what that “thing” was. I’ve gone down a few paths before, and given some things a shot, but could never quite put my finger on what I was destined to do. Growing up, I always wanted to start a club or group in my neighborhood, but that “club” always ended up being me and my neighbor girl (lol) and never really amounted to much.

I am from a pretty small town, called Corry, PA, where only about 6,600 people live. My dad was a Metallurgical Engineer and my mom worked in our school system as a Teacher’s Aide. I had a great childhood and was surrounded by very positive, friendly people (for the most part). But, when it came to choosing a career, I never considered anything too “outside the box” because those kinds of jobs didn’t really exist in Corry, PA. I didn’t know that you could get paid to re-arrange furniture and decorate someone’s home! My mom and I did this all the time and I loved it! I didn’t know that you could video yourself doing something, post it online, and make money from it. And I certainly had no idea how to design a website or build a platform for social sharing…I didn’t even know these were viable options! And, to be honest, being involved with computers meant you were quite “nerdy”, which was not what I was going for in my teenage years (ohhh, how the tables have turned now, lol).

I ended up getting a degree in Biology (not nerdy at all, right?) and then followed that up with a Master’s in Education. Being a teacher was one of the few career paths I was very familiar with as a kid…that and being a banker, waiter, doctor, shop worker, and retail associate. After I got out of graduate school and discovered the power of the internet, I realized that I had not even come close to tapping into the big world of opportunity that was out there; I was surely bit by the “entrepreneurial bug”. Then it hit me… my own father had his own international business, run out of our basement, and was an entrepreneur all this time! But, to me (growing up), all that meant was that he traveled and was on his phone/computer a lot. He never called himself an “entrepreneur” and I had NO IDEA the sacrifices, challenges, and hardships him and my mom faced to support our family, especially in the early “risky” stages that are full of uncertainty. Occasionally he would talk about a successful “deal” he’d won, which usually meant he wanted to celebrate! He’d treat us to a nice dinner or give my mom and I some money to go shopping (

), but I never knew the courage and strength he had, because I was simply too young. But now, I’m super curious and wish I could sit down and talk with him.

My dad passed away almost 8 years ago…I was 22 when he died. I’m really pissed about the fact that ALS (Lou Gehrig’s Disease) took him away from me too early…I had so much to learn from him and didn’t even know it. My parents did a great job of “sheltering” my brother and I from the pressure that owning your own business can bring, especially with all of the international travel and stress that can cause on a family/marriage; we, for the most part, had no idea. But I don’t want to be “sheltered” anymore. I want to know the real hardships, struggles, challenges, and successes (that usually only your family well tell you, but), I have to learn about my father and his journey through a third-person, my mom. She has great stories and information to share with me, but it’s nothing quite like hearing it from someone who’s been through it first hand. She often recalls phrases or lessons she learned from him, regarding his business, and passes them down to me…one of them being “Don’t ever burn a bridge” and I really do take this advice to heart.

When I think about it, I get really sad that my dad isn’t here on Earth with me to see what I’ve accomplished so far. When I escaped the “bubble” of my small town and migrated to the beautiful city of Charlotte, NC, I became even more motivated, driven, and passionate about making something of myself. For me, teaching just didn’t cut it, however I enjoyed my several years in the classroom…especially the people and student’s I worked with. But, as I’d think about my life, and what it looked like (I have visions… I know, it’s weird), but I never envisioned myself being a teacher forever; there had to be something more…but what was it?

As I said before, I’ve dabbled in a few little “ventures” but nothing compares to what I feel for WIRL Project. I can share so much about my life on this platform and people actually care! I can connect people to empowering and inspirational stories that will help them, and I can be myself without using a filter, hashtag, or fake persona…I can be me. I can get advice and read stories from people who are like-minded and who also want to share their story…this has always been what I love doing anyway, it makes sense that I am so passionate about it.

Recently, I met with a small group of entrepreneurs in Charlotte and one of the guys from our group gave me one of the nicest complements I’ve ever received… it solidified everything. He said, “Sara, you’re a visionary – you see things other people can’t see and have a passion to bring these visions to life. You are going to make something of yourself, and I think WIRL Project could really be “it” for you.” Now, I barely know this guy. He doesn’t know my story, or that I’ve been searching for years to figure out what I was meant to do, but when he said this to me, it all made sense.

So now, I look back on my life and the lessons I’ve learned along the way in a different way. I don’t look back simply to remember, I look back to recall the experiences and lessons I learned from my dad, mom, hometown, school, colleagues, and from work and I’m still learning everyday. Who says you shouldn’t look back…for me, it’s teaching me invaluable lessons and launching me forward in ways I’d never thought possible.

An Open Letter From A Homeschooling Mother

What It’s Really Like – The Story Behind WIRL Project

Thank You Notes From Jimmy Fallon

Thank you, Jimmy, for being so entertaining! Here is your weekly dose of Thank Y... END_OF_DOCUMENT_TOKEN_TO_BE_REPLACED

My husband and I travel often and to many places. Sometimes our trips are week l... END_OF_DOCUMENT_TOKEN_TO_BE_REPLACED

Looking for a Quick and Easy Way to Collect Addresses for Party Invites?

Have you ever spent HOURS trying to collect addresses or other contact in... END_OF_DOCUMENT_TOKEN_TO_BE_REPLACED

Last year I blogged about the wreath I made for our front door because it was on... END_OF_DOCUMENT_TOKEN_TO_BE_REPLACED

Since becoming a mom, I’ve learned that there are NOT enough hours in a da... END_OF_DOCUMENT_TOKEN_TO_BE_REPLACED

A little more than a year ago, I left my “cushy” job in corporate to... END_OF_DOCUMENT_TOKEN_TO_BE_REPLACED

Every athlete has that one defining moment in their career which changes their l... END_OF_DOCUMENT_TOKEN_TO_BE_REPLACED

All moms need support sometimes, specially when we´re feeling down or lonely or ... END_OF_DOCUMENT_TOKEN_TO_BE_REPLACED

Happy Valentine’s Day to everyone at WIRL Project! Hope you have a wonderf... END_OF_DOCUMENT_TOKEN_TO_BE_REPLACED