My husband (Dave) and I are very lucky to have close friends that have children around the same age as our 14 year old daughter, Devon. We get to share our concerns and frustrations with our friends as we know that they’re experiencing the same things with their children, or will be in the near future.

A common topic that we discuss is how scary it is to raise a teenager in the twenty-teens (isn’t that odd to say, the twenty-teens!?!) Along with all of the worries that our parents had when raising us, we now have the added worries of technology and social media.

I was 16 when I got a cell phone, it was the Nokia 5110, the one that you’d make a stop a Radio Shack to pick up a new cover when you wanted to “change things up”. I had my cell phone “just in case” I had an emergency while away from my parents. There was no such thing as unlimited texting back then and we certainly could not send pictures! 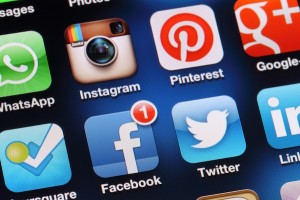 We got Devon a cell phone last year when she was starting to babysit. Since most people (ourselves included) do not have home phones anymore, it was very important for her to have away to get a hold of us if she needed to while she was watching some the little ones. One of our rules when we got her phone was that whenever we ask for her phone, she hands it over, no questions asked, no time to close out of what she’s looking at or to delete recent texts. We check her phone often. We know who she is texting and what she’s talking about. Do we believe she should have privacy? Of course, but we also believe that as parents of a 14 year old, we need to be PARENTS.

We’re very lucky that Devon hasn’t asked for a Facebook account. We’ve actually talked about it several times and she has no interest. I know that will change and it’s only a matter of time, but when she does, she will know what our rules on Facebook will be. She’ll know that Dave and I will have her password and that we’ll be checking her account regularly. I truly believe that at 14, she does not need complete privacy when it comes to social media. She should not be putting things out online that she would be embarrassed for her parents to see and read.

When she asks to start a Twitter or Instagram account, she will have the same rules. Dave and I will have complete access to her account. SnapChat scares the you know what out of me, and I don’t think that we would allow her to have a SnapChat account anytime soon. Honestly, why would a 14 year old need to send pictures that automatically get deleted after so many seconds? It sounds like a bad idea to me!

I would LOVE to hear how other parents are raising their teens with technology. What scares you the most? What are your house rules for social media?

Heather
I am the mother to the most hilarious 14 year old I’ve ever met, wife to one hot HOT (Husband Of Thirty-One), and a crazy bag lady… or if you want to be formal about it, I am an Independent Director with Thirty-One. Whoo Hooo!

Being a Work at Home Mom

We all know that once you become a mom, you enter the world of Judgervill... END_OF_DOCUMENT_TOKEN_TO_BE_REPLACED

I’m feeling a sense of sadness when I look around to watch some of my frie... END_OF_DOCUMENT_TOKEN_TO_BE_REPLACED

Does anyone have a  somewhat “healthy” recipe to satisfy my chocolat... END_OF_DOCUMENT_TOKEN_TO_BE_REPLACED

I’m not exactly sure when it happened, but sometime in the past few months I rea... END_OF_DOCUMENT_TOKEN_TO_BE_REPLACED

I Chose to Love

This past Friday was a huge day. In case you’ve been without any sort of c... END_OF_DOCUMENT_TOKEN_TO_BE_REPLACED

Love and loss, highs and lows, ups and downs. All of these are part of life, but... END_OF_DOCUMENT_TOKEN_TO_BE_REPLACED

When I first started blogging, I thought I should write a full story of my life.... END_OF_DOCUMENT_TOKEN_TO_BE_REPLACED

Does anyone have any recommendations as to where I can find affordable artwork a... END_OF_DOCUMENT_TOKEN_TO_BE_REPLACED