BlogU: I Had a Weekend My First Blog University Experience

I spent the majority of last week far from home – in the exotic land of Baltimore, at BlogU’15. It was a remarkable trip- I met dozens of new friends, caught up with even more old friends, learned, laughed, danced my ass off, and was beyond honored to be chosen by the Huffington Post for the Term Paper of the Year - an award to recognize the best of blogging over the past year.

This award is something I almost didn’t accept, though. You see, the post I wrote, the one that Huffington Post named the best creative writing in a blog post for a whole calendar year, is something I can’t even describe without crying. I wrote it after Christmas, when we were in a sort of limbo with M’s cancer, and I was contemplating the idea that my husband might not live to see another Christmas. At the time it was something I could write, because we didn’t know anything at all. We didn’t know when it was going to happen, or if it was going to happen, or especially when it was going to happen, but I couldn’t begin to write something like that now. Because four months after I published that post, it did. My husband’s cancer was back, and I was thrown headlong into the chaos of scheduling surgeries and orchestrating chemotherapies.

“Spinning the roulette wheel,” I believe I called it in that post.

For about two and a half months, now, I’ve been living in the overwhelming uncertainty of brain cancer Hell. In a lot of ways, it’s not so bad. In a lot of ways, it’s very matter-of-fact and straightforward. Organize pills into the six or so segments in which they must be taken. Coordinate with physical and vocational and occupational and cognitive therapists for “return to work” plans and orthopedic testing. Write down everything. EVERYTHING. 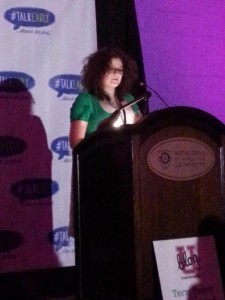 So I stood up in front of a crowd of amazing bloggers and human beings in general, and I read everything I haven’t been willing to say to myself, even in the quietest, vaguest of terms. And I cried.

I knew I would cry the moment Emma Mustich said my name. She looked over at me, and I felt that heaviness in my chest. Not dread, exactly. Not public speaking nerves. Something else.

I broke all the rules of good public speaking the moment I stepped behind the podium, looked at the screen set before me with my words waiting, and sighed. A heavy, loaded sigh. And then I began to read.

And I cried. There were already paper napkins set next to the microphone for me. I didn’t miss a beat. I just cried, and wished all over again, with all my heart, that I could bring the sunshine back. If only for another minute. If only for a heartbeat. I wished I could spin the world round and never have written this awful thing, this beautiful and terrible thing, that I was standing watching somebody else bare a soul scarred by their own demons. That I could be drinking too many glasses of wine and cramming my face with pastries and not have a spotlight I’d asked for shone on my sorrows.

When I finished reading, everyone clapped. People handed me gift bags and hugged me, and I stumbled off the stage, into the arms of The Domestic Pirate. She hugged me as though we were the oldest and dearest of friends, and I broke.

For a minute I stood in a darkened auditorium and wept into the shoulders of somebody I’d met in person for the first time that day. There haven’t been words invented yet to describe the sort of gratitude one feels for friends like that, unequivocal, genuine, and present.

The rest of the weekend passed in a manic high. I learned, I laughed, I got drunk and danced until I was pretty sure I tore something. Kind of like I know I said I sometimes do in that same piece.

People were so gracious. They were so kind. They said the nicest, most flattering things, and I blushed and tried to accept their compliments without feeling fraudulent. And then I came home, and crashed.

What I should have learned years ago was that you can’t do this to yourself. You can’t not feel, and then feel, and then not feel things you don’t want to. The emotional energy invested in not feeling something is outrageous. I spent five years expending that energy, through M’s original diagnosis, through chemo and radiation and experimental arsenic IVs. Through a wedding and two pregnancies, through unemployment and both of our return to school. Through so much doubt, and so much uncertainty.

And the minute I could lift the curtain on all that repressed anxiety, it crippled me. It nearly killed me.

I believe we’ve survived M’s cancer so long because of this optimism, this blindness to the alternatives, but maybe it’s not the only way.

Part of me is certain that unless I pull that curtain closed, really shut out the doubts and fears, they will manifest themselves.

The way that until I wrote about worrying that my husband’s cancer would come back, it hadn’t come back. That my comfort with my grief precipitated the new need for surgery by four measly months. Like I did this to him. Like this is my fault, for publicly doubting, even for a second.

Like if only I’d never let that doubt out at all, we would still be living as though we were done with brain cancer forever.

And that’s what hurts the most. Knowing that, no matter how wrong it is, or how self abusive it is, no matter what… if things go badly, it will be my fault. Because I’m the one who wasn’t strong enough to keep shutting out those doubts.

No matter what, I will never be as purely certain of the future as I was eight years ago.

Maybe the cynicism of age, or the experience, or the realism, or whatever you call it, is inevitable. But that also implies that death is inevitable.

I want to say I know we’ll survive, but I don’t even know what that means right now. All I know is I want to wake up in the morning with my husband’s cheek resting on my ear, with his stomach pressed into my back, and I want to stay there forever. Until the sun sets and rises and sets again, and we’re the only things left in an entire universe of passing time.

I want to feel warm, and safe, and loved, and to believe that each day is going to be no different from the last.

I want to stop waiting. 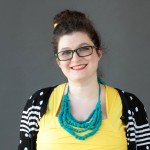 Lea Grover is a writer and speaker living on Chicago’s south side. Her writing has been featured in numerous anthologies, including “Listen To Your Mother: What She Said Then, What We’re Saying Now,” and on websites ranging from The Huffington Post to AlterNet to The Daily Mail Online, and she speaks about sex positivity in parenting and on behalf of the RAINN Speakers Bureau. She can be found on her blog (Becoming SuperMommy), on Twitter (@bcmgsupermommy), and Facebook, or preparing her upcoming memoir.

What Working Out REALLY Means To Me

I am not a gym type of person and I always tried to avoid physical exercise. Nev... END_OF_DOCUMENT_TOKEN_TO_BE_REPLACED

My alarm goes off and the sun is barely up. The voice in my head tells me it is ... END_OF_DOCUMENT_TOKEN_TO_BE_REPLACED

Why I LOVE the T25 Workout System

So why do I love the workout system T25? Well, because it works! Nobody h... END_OF_DOCUMENT_TOKEN_TO_BE_REPLACED

Justin Timberlake’s “I Heart Radio” Award Acceptance Speech: Advice to Those Who are “Different”

Your Critics Do Not Count, Their Words Will Fade…You Won’t Th... END_OF_DOCUMENT_TOKEN_TO_BE_REPLACED

Being a Work at Home Mom

If my 14 year old wouldn’t kill me, I would take a picture to show you wha... END_OF_DOCUMENT_TOKEN_TO_BE_REPLACED

The Best Thing About MEMORIES …..is making them. “We don’t remember days, we rem... END_OF_DOCUMENT_TOKEN_TO_BE_REPLACED

How to Calculate Retirement Age

I have identical twin sons, Tai & Jay, now all grown up in their 20’s,... END_OF_DOCUMENT_TOKEN_TO_BE_REPLACED

Sample Food Menu for a 2-Year Old: One Mom’s Account

Sample Menu for a 2-Year Old: One Mom’s Account The sample menu below tak... END_OF_DOCUMENT_TOKEN_TO_BE_REPLACED