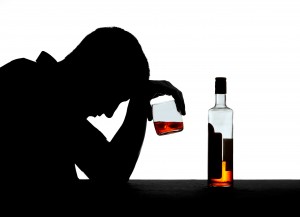 At least one person in your life has probably told you that you cannot fix the broken.  That no matter how hard you try, if someone doesn’t want to be fixed; they won’t be. A lot of us also consider ourselves to be “Fixer uppers.” By that I mean we will date some people with seemingly more issues than us, just to feel better about ourselves… Or maybe you are the opposite… maybe you date guys that are considerably better than you at everything. In this case, you do it to make yourself look better.

The point is, can you ever really be content? If you aren’t happy with yourself, how can you be with anyone else?

We, as humans, often try to fill the gaps that others have left open. Some of us use sex, while others may use drugs or alcohol. There is a significant difference between filling a gap, and wasting your life.

These days more and more teens use alcohol as a source of entertainment. Some claim it is just all fun and games, while others are embarrassed to say anything.

I know someone who lives his life stuck. He doesn’t go anywhere or do anything. He stays home all of the time. If he does leave, it is usually to the store… to buy the poison that I believe will one day take his life. For years he has been like this. He refuses to believe that it is a problem, and he often takes moral support as a joke. Help? No. He doesn’t need it. Or at least that is what he says.

I see that he is hurting, and I know that he could change.

But you cannot fix someone who doesn’t think they are broken.

I see the impact it has made on his life. Nothing good has come from it. He is sinking, but he doesn’t want to swim.

Can he? I don’t know.  It seems that he has never wanted to swim. It is as if he has tied an anchor to the end of his feet, said his farewell, and has taken the journey deeper down into his sorrows. Whether he has poison running down his throat or not, he is the same. He isn’t fully here I don’t think, and maybe one day, long ago he was. Or maybe one day he will be here again, floating back up to the top…swimming on his own.

I think that he just needs a friend, so that is what I have tried to be. But sometimes being a friend just isn’t enough. Some people need more than a friend to mend the brokenness that they feel inside. I have realized, in all my time of trying to fix him, that you cannot fix those who were taught to be broken.

Maybe if he had a better example when he was younger, maybe if he had someone there for him to positively redirect his actions, maybe he would be better. Maybe if someone would have stayed with him instead of leaving him behind to deal with his own struggles… if someone had just told him that they were by his side…that they wanted to mend his broken pieces…maybe, just maybe…he would have the chance to be okay.

But instead he is sinking past the fish in the sea…down as the anchor he wasn’t meant to be. Maybe one day he will float again, but for now the poison is his only friend.

And I ask myself, when should I stop trying?

But then I remember…

He is sinking on his own, without a desire to swim.

And I cannot fix that, even though I wish I could.

I watch him struggle and I feel like it is my fault. What did I do? Why won’t he change? But it isn’t my fault. Not at all. I have watched him stumble and slur his words. Still, I pick him up. Why did I pick him up?

I can’t help but feel that it is my responsibility to fix him. Honestly, I don’t think anyone can fix him. No matter how many people reach out to him, I think he will always be just as miserable as he was yesterday, or fifteen years ago.

And finally I have to be content with knowing that there is absolutely nothing I can do. If he sinks, I will sink with him from helping him swim.

I just hope one day that the pain he feels inside of him will wither away. As he continues to poison himself, I realize more and more that he is only masking his pain. In fact, he is causing himself more pain as he continues to fill himself up with nothingness.

The thing is…he isn’t any more damaged or broken than the rest of us. He isn’t fighting a terminal disease or homeless or broke. He is just weak in the sense that he doesn’t know any other way to get rid of the pain than to cover it up with more pain.

Again…he is sinking without a desire to swim.

And that is what draws me closer. The idea that I can make a difference. But I can’t. So I won’t.

This isn’t where his story ends. I don’t think it ever really began. Maybe one day he will make a story for himself.

But one can only say maybe so much, before it is time to let what could be, turn into what will never be.

Because he is sinking… and telling him that he could survive if only he stood up is like swallowing the poison myself.

But I still love him for reasons otherwise unknown.

This is me. This is who I am. I am honest, sometimes to a fault. I am a realist,... END_OF_DOCUMENT_TOKEN_TO_BE_REPLACED

Creating a meal schedule for your child can be a difficult task. I often felt I ... END_OF_DOCUMENT_TOKEN_TO_BE_REPLACED

The Glamorous Life of Blog Photography

Let me take you behind the scenes for a few minutes at a glamorous real life blo... END_OF_DOCUMENT_TOKEN_TO_BE_REPLACED

I started blogging a little over a year ago. In this time I’ve learned SO ... END_OF_DOCUMENT_TOKEN_TO_BE_REPLACED

Hi, I am Kristin Cogan and I am a wife and stay home mom to my 3 1/2 year... END_OF_DOCUMENT_TOKEN_TO_BE_REPLACED

Seeing Mental Health from Both Sides

Working in an acute psychiatric hospital for 14 years as a Registered Nurse, I c... END_OF_DOCUMENT_TOKEN_TO_BE_REPLACED

10 Things People Do Not Know About Having Twins

This “10 Things People Do Not Know About Twins” list came from two p... END_OF_DOCUMENT_TOKEN_TO_BE_REPLACED

My alarm goes off and the sun is barely up. The voice in my head tells me it is ... END_OF_DOCUMENT_TOKEN_TO_BE_REPLACED