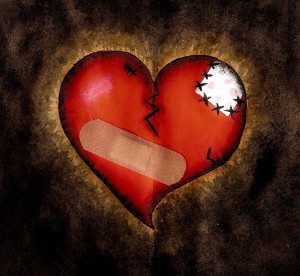 I finally met a man several months back that I thought was nice, fun, and responsible. I wanted something exclusive with him, but was waiting for him to make the move. In the meantime, I was dating other men and I was honest with him about this; we were not exclusive at the time. He went ape-shit-crazy texting me non-stop telling me how terrible I was and he wanted me to go get a STD test, which I did. So, I asked him if he had been dating other women and he swore he had not… he didn’t have the time to do that.  After my STD tests came back negative, he wanted to be exclusive.

I was so happy and excited because I thought he cared about me. I waited a couple of days to finally post a picture of us as my profile picture on FB. I was a little nervous about it because I wanted to make sure this was all real and okay for my friends to see that I had taken the leap.

Days go by and friends are posting cute things about us, “cute couple”, “where have you been hiding him”, and “so happy for you both”. Even a man that I had been interested in several months back “liked” my profile picture. Now that opportunity was gone.

Posting this was so “out there” for me, it had been 7 years since I had an exclusive relationship like this.

Four days pass and I wake up Easter morning to a FB message from a woman claiming she had been also been dating my “exclusive boyfriend” over the past few months.  I swear I read that email 5 times before it made any sense to me.  She saw our picture on a mutual friend’s FB page and recognized my guy. I could not believe this! He was so adamant he had not been seeing other people, and he had tortured ME for dating other men and not telling HIM?!

I decided to just confront him and not talk to the other woman. He said she was nuts and he had broken if off with her a month ago and she had been threatening him. I chose to believe him (stupid), he apologized, and I found a way to forgive him. 24 hours later there was another email from this woman, she was relentless on trying to get me to talk to her. I did not want to talk to her and quite frankly was afraid of what I might hear.

On a side note…about a month ago he had bought 6 Beautycounter Sugar Scrubs from me (I am a Beautycounter Consultant) . At the time, I told him I hoped he was not giving the scrubs to any of other women he may be seeing. He looked at me like I was crazy and told me that he was giving them to his sisters and stepmother.

You know what I am about to tell you, right? I get another email from this woman and she says she knows I am a consultant with Beautycounter and she tells me she received a sugar scrub from my guy a couple of weeks back. That was what it took for me to pick up the phone and call her. I hear all the things I did not want to hear, like he was trying to decide where to propose to her, she received 2 dozen roses (I received only one), and he was with her Valentine’s night. I thought it was weird we went to a party Valentine’s night and then he brought me home and told me he needed to go home because he was exhausted from all his work travels.

Did you know there is a tracker on your phone thru FB and you can see where people are at all times? I just stumbled across it several days prior to Valentine’s day. It showed him as being somewhere else other than his house that night. Now you are probably thinking I am stupid…but you have to remember we were not exclusive at the time. I just filed it away in my head somewhere.

I confronted him after my chat with his other woman and told him it was not cool at all that he had given her one of the Beautycounter scrubs. He proceeded to actually tell me that she was not telling the truth and he had not done that. Really?…..I am blonde but not that blonde.

He no longer is my guy and I have never felt better and more empowered. It was one of the first times that I took a hard stance and told him to leave me alone. I did all this while holding my composure, not crying, and hanging up the phone with a smile.

If you were to read this, and not know my age (50), you could easily think it was a story told by a 20 something year old.  It does not matter how old you are when it comes to dating, you can be a “bad picker” but remember you are not the only one going thru this BS and there is nothing wrong with you.

P.S. He has texted once and called me twice while I have been writing this, and I have not answered.

I don’t know why, but ever since college I can only write with pens... END_OF_DOCUMENT_TOKEN_TO_BE_REPLACED

Nine is the New Thirteen

We are on the edge at my house. A very delicate, confusing, frustrating edge. Yo... END_OF_DOCUMENT_TOKEN_TO_BE_REPLACED

We used to have a wooden coffee table in the middle of our living room. B... END_OF_DOCUMENT_TOKEN_TO_BE_REPLACED

When Flying Makes You Ask: Are You Serious?

Recently I flew to Hawaii for spring break to go see my family. While on the ele... END_OF_DOCUMENT_TOKEN_TO_BE_REPLACED

What Working Out Means to Me

Until recently, I vowed that I would have an exclusive relationship with the wor... END_OF_DOCUMENT_TOKEN_TO_BE_REPLACED

A little more than a year ago, I left my “cushy” job in corporate to... END_OF_DOCUMENT_TOKEN_TO_BE_REPLACED

Upon leaving the consultation for a breast augmentation, I was consumed w... END_OF_DOCUMENT_TOKEN_TO_BE_REPLACED

Hi, I am Kristin Cogan and I am a wife and stay home mom to my 3 1/2 year... END_OF_DOCUMENT_TOKEN_TO_BE_REPLACED

Does Only Clear Skin Warrant Success?

My acne is only skin deep. My skin won’t stop me because… I a... END_OF_DOCUMENT_TOKEN_TO_BE_REPLACED