15 Days. Fifteen days that felt like an eternity. Having a child in the NICU is a long, emotional roller coaster that nothing can prepare you for. Luckily, my story is a good one, and we now have a healthy 19 month old. However, I’ll never get back those minutes, those hours that I could not hold him, I could not kiss him. I wasn’t the first, second, or probably even the third person to hold my son.

Back to the beginning – after 34 weeks of what seemed like a “normal” pregnancy, I was starting to swell.  My shoes didn’t fit, my ring didn’t fit and I felt miserable –but I thought this was all “normal” pregnancy symptoms. I gained 10 pounds in two weeks. At my 34 week appointment I was admitted to the hospital for high blood pressure. After 24 hours and an extremely high protein count I was diagnosed with severe pre-eclampsia. My son needed to be born now. Pre-eclampsia is the the leading cause of maternal and infant illness and mortality.  (For more information visit here)

Pre-eclampsia is the the leading cause of maternal and infant illness and mortality.

I was rushed to the OR – I didn’t have time for my doula to arrive, I didn’t have time to think about what was going to happen to me, and I definitely didn’t get to ask the question about what would happen to my baby after. I knew he would likely spend some time in the NICU. But no one warned me that I couldn’t hold him, that I wouldn’t even get to see him (other than the quick – over the sheet glimpse) for OVER 24 hours. Those hours were the most agonizing 24 hours I have ever had to endure. Because of my blood pressure and my high protein levels, I was at risk for having a seizure. To minimize that risk I was on a magnesium sulfate drip. “Mag” as it is lovingly referred to – is really nasty stuff. I felt like I was on fire. It makes your muscles feel like rubber bands.

…no one warned me that I couldn’t hold him, that I wouldn’t even get to see him (other than the quick – over the sheet glimpse) for OVER 24 hours. Those hours were the most agonizing 24 hours I have ever had to endure.

I felt like I was a prisoner. I couldn’t go see my son – I was hooked up to two IV lines, oxygen, leg pressure cuffs, an oxygen monitor and a BP cuff. They had the lights off in my room, and the TV was not on. All to minimize the risk of having a seizure.

My husband split his time between staying with me and visiting our son. I recorded a tearful message on his phone that he played for him in his incubator. It wasn’t until months later that I found out that he didn’t hold him in the NICU until I was allowed to go and see him. My husband wanted me to hold him first.

It wasn’t until months later that I found out that he didn’t hold him in the NICU until I was allowed to go and see him. My husband wanted me to hold him first.

The day after he was born the doctor came in and I was awaiting the words that I was ok to be taken off of the magnesium and wheeled down to the NICU and I could finally hold my baby boy. My blood pressure was still high and initially I was told I would not be allowed to see him – that I still needed the “mag” for another 24 hours. I broke down. I balled. I couldn’t handle it.  They couldn’t keep me from my baby!

I was told to “calm down”  because my BP skyrocketed. In the end I was told I could be taken off the magnesium to go and see him for an hour.

I could barely stand to get into the wheelchair and the nurse shielded my eyes in the hallway from the lights. Finally, I got to meet our son. This was just the beginning of our NICU journey.

I was discharged two days later – only to leave the hospital and leave our baby boy behind. Coming home without your child is probably the hardest thing to do. However, knowing he was ok, and was in good hands in the NICU is a small comfort.

Coming home without your child is probably the hardest thing to do. 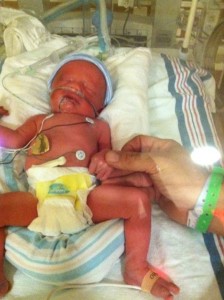 Our daily routine consisted of my mother-in-law driving me to the hospital in the morning, me sitting by his side – staring at him in the incubator and hoping that all of the nurses notes would show that he was doing better, getting stronger, and meeting the milestones he needed to in order for us to bring him home. Those milestones consisted of getting him to eat so much at a feeding, gain weight, and to keep his body temp up on his own. I was an emotional wreck and anytime there was any setback I wanted to scream. I remember trying to coax him to eat just a few more milliliters from his bottle.

My husband went back to work so that he could take time off when we got the baby home instead of spending time at the hospital. We would both go back in the evening, or if I was too exhausted my husband would go and stay with him.

Our first diaper changes were through the portholes of the incubator.  We had to watch the “wires” and re-connect his oxygen monitor. We would sit and listen to the different beeps that came from the monitors showing that he was breathing, and that his oxygen level was ok. The first few times an alarm goes off it’s scary! Those beeps become strangely comforting and the first night home without them is nerve-wracking!

Our first diaper changes were through the portholes of the incubator.  We had to watch the “wires” and re-connect his oxygen monitor.

Each night we had to say goodbye. They tell you it’s hard to leave your baby, but they fail to mention that you have to repeat this day after day after day. I was told that this wouldn’t last forever, that it would come to an end and it did.

Thankfully, I had a wonderfully supportive husband and we got through it together. We were the lucky ones, our baby boy is doing just fine and at the end of our 15 days – we finally got to take him home.

The Best and Worst of Three Prenatal Workouts

This is me. This is who I am. I am honest, sometimes to a fault. I am a realist,... END_OF_DOCUMENT_TOKEN_TO_BE_REPLACED

We recently moved and inherited a dining room with white/cream colored carpeting... END_OF_DOCUMENT_TOKEN_TO_BE_REPLACED

Bedtime is the best time

Bed time is the best time…and get your mind out of the gutters people!! I&... END_OF_DOCUMENT_TOKEN_TO_BE_REPLACED

“Give Peace A Chance”

Dear Citizens of the United States of America, In the wake of the rioting... END_OF_DOCUMENT_TOKEN_TO_BE_REPLACED

It’s hard to believe that 4 years ago I knew pretty much nothing ab... END_OF_DOCUMENT_TOKEN_TO_BE_REPLACED

Does anyone have a  somewhat “healthy” recipe to satisfy my chocolat... END_OF_DOCUMENT_TOKEN_TO_BE_REPLACED

Having the winter blues?? Well, I was… so why not take on a fixer-upper wi... END_OF_DOCUMENT_TOKEN_TO_BE_REPLACED