We REALLY Were Awesome In Middle School: BlogU 15 BlogU: The Good, The Awkward, and The Bloody

A while back, I wrote a post about doing something for yourself. I mentioned that after a pretty shitty year, I had decided to do something fun for myself and had signed up for the Blog U Conference. I knew absolutely no one who was going and knew basically nothing about it, but the website had pictures of ladies wearing really ugly prom dresses, and that looked sort of like something I’d enjoy, so I was all in.

Fast forward to a few months later, AKA this past weekend, and it was time for the conference. I felt like a complete train wreck. I felt unprepared. I felt like what the hell was I thinking when I signed up for this?? Little old me with my teeny weeny brand new blog was trying to run with the big dogs. BUT I AM SO GLAD THAT I WENT. There was a little Bad, a lot of Good, and actually more Ridiculous than you can even imagine, but my God, the ridiculous was the best part.

Let’s get this section out of the way first.

Part A: THE FOOD. I can really describe the food without even using a whole lot of adjectives. Actually, I can describe it in one word. Not even a word, an interjection, if you will: EW. I don’t even know what was happening here or what I expected. We were on a college campus, and it was cafeteria food, but I really don’t remember my college’s cafeteria being that gross. It was actually sort of good. I’m pretty positive these people have never heard of butter. Or seasonings. Of any kind. It was rough. This may not be important to most people, but food is a very large part of my life. Also, I am pregnant. The best thing I ate was a peanut butter cup cupcake, and I got the very last one, so everybody else was pretty much screwed. That’s all I have to say about that.

Part B: THE DORMS. The dorms were not horrific. They were dorms. They were sort of old, a little run down, but it was fine. The problem I had with the dorms was the fact that my blankets had some sort of orange stain substance all over them. And I’m pretty sure the walls had boogers on them. Luckily I brought my own blankets, and the boogers were high up so I didn’t have to look at them unless I tried really hard (I’m assuming the culprit lived in the top bunk). The showers and bathrooms were okay, I guess. It could’ve been worse; it could’ve been better.

Part C: THE PREGNANCY. WHOA. Whoa, whoa, whoa. Wait a second. Didn’t mean to mislead you there. Blog U did NOT cause my pregnancy, nor did they have anything to do with it. Was totally pregnant before I got there. But being pregnant was kind of lame because I was super tired and pretty nauseous most of the time. I actually had to miss the last class because I wasn’t feeling so hot, which I was really bummed about. All the reason to return next year though, right?

Part A: THE INSTRUCTORS. The conference was super intimate, and so all of these people who are like celebrities in the blogging world were just walking around acting like normal civilians. When I walked in to registration, Lynn Morrison, who is an editor for Blunt Moms and writes at Nomad Mom Diary introduced herself to me. I almost keeled over. I think I was a little star struck. I ate breakfast with Rebecca Gallagher of Frugalista Blog. These were the people teaching the classes. They were so nice and personable and funny and normal.

Part B: THE PEOPLE. Everybody was just really nice, even when I was being socially awkward. And even when I was all, “OH MY GOD I LOVE YOUR BLOG IT’S SOOOOOO FUNNY.” And even when they had never heard of me (mostly)! I met some really awesome people who answered questions I had and who I could just chat with about blog stuff, none of which my husband understands. It was great.

Part C: THE LEARNING. Literally in the first twenty minutes of being there, I thought to myself I could leave now if I wanted to because I’ve already learned SO much (with many thanks to Jen Kehl from Beyond Blog Design). But of course I didn’t want to leave, and there was much more to be taught. I have pages and pages of notes and could probably work on things for a month without even doing any writing (but I’ll save that for when my kids go to bed). I feel like I’m a LOT less clueless about all of this blog stuff now (except still pretty clueless, because there is so much to learn). 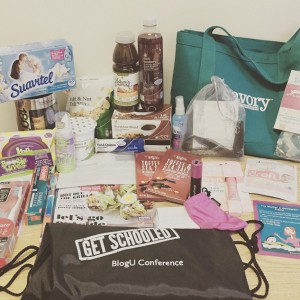 Part D: THE SWAG. Holy smokes. I left that place with two giant packs of diapers, Ajax, a headband, a selfie stick, a MyCharge Power charger, snacks, magnets, pens, notepads, coupons, a gift card…and that doesn’t even begin to cover it all. It all probably cost more than I paid for my ticket to go to the conference. It was wonderful. There’s just something about free stuff that makes my heart smile. I really, really love it.

Part E: THE PARTY (Get it? Because PART-E sounds like PARTY? HAHAHAHA). The Middle School to the Max party sponsored by Nickelodeon was literally like a dream come true for me. Not only did we get to dress up in costumes (as our middle school selves), but there were tons of cool details. The decorations were AMAZING, there was a photo booth, a sweets snack bar, an amazing DJ, and a contest for best outfit and most awkward middle school picture. I am a party girl at heart, and a party planned down to every little detail is something that totally sells me. Plus all of the people there were dancing like fools, so it was a great atmosphere. I honestly can’t remember the last time I had that much fun.

Imagine emcee Nicole Leigh Shaw of nicoleleighshaw.com breaking into a rendition of “On Top of Spaghetti” and all of the audience members happily joining in to sing along. Imagine Kim Bongiorno of Let Me Start By Saying in the center of a circle participating in a dance-off, dressed as Urkel. Pretty ridiculous, and pretty awesome, am I right? (If you answered “no,” you are zero fun and I want nothing to do with you.)

Overall, it was a wonderful experience, and I definitely plan on going back next year as long as I keep this little blog afloat. There were so many cool opportunities presented to us this weekend that I can’t imagine not going back. Expect lots of changes around here in the coming weeks (you may have already noticed some), and hopefully big things in the future!

Morgan Starr is the mom of two rough-and-tumble toddler boys, born only 18 months apart. She’s crazy enough to add just one more to the mix, and a new baby will be joining the bunch in January. She’s a high school English teacher with a passion for reading and writing, and she uses her blog as her number one writing outlet, which can be found at www.rookiemommyraisingboys.com . She writes about the craziness of parenthood with a humorous spin but sometimes focuses on the serious side of life. She may be a little obsessed with social media too and loves to tweet about her busy but fun life @rookie_mommy and share stories and pictures on Facebook.

WIRL Challenge Wednesday: What Is It REALLY Like to Be or Have a Twin?

The Top 10 Things I Learned at BlogU

The Glamorous Life of Blog Photography

Skin color is only skin deep; it won’t stop me from being successfu... END_OF_DOCUMENT_TOKEN_TO_BE_REPLACED

If you’re anything like me, you read views and do your research before you... END_OF_DOCUMENT_TOKEN_TO_BE_REPLACED

I Just Want To Nest!!

With a toddler to care for all day and another baby on the way, there is not muc... END_OF_DOCUMENT_TOKEN_TO_BE_REPLACED

“I believe that taking your last breath does not mean you are dead. I beli... END_OF_DOCUMENT_TOKEN_TO_BE_REPLACED

I was inspired to write this WIRL after reading about Jacquelyn Frazier. Jacquel... END_OF_DOCUMENT_TOKEN_TO_BE_REPLACED

There is a buzz going around online about comparing dogs to children. A recent p... END_OF_DOCUMENT_TOKEN_TO_BE_REPLACED

The Kindergarten Milestone – The First of Many Lasts

To my third child on her entry to kindergarten: I’m not sure why kindergarten is... END_OF_DOCUMENT_TOKEN_TO_BE_REPLACED

Arden turned three in March, but has run the roost since she was just a couple m... END_OF_DOCUMENT_TOKEN_TO_BE_REPLACED

There’s a First Time for Everything!

Getting to this very moment has been an incredibly interesting journey and I can... END_OF_DOCUMENT_TOKEN_TO_BE_REPLACED