Drugstore vs. Department Store Makeup The Story of My Good, Bad, and Ridiculous Weekend: BlogU15

Last weekend I had one of those Experiences-of-a-Lifetime-You-Will-Never-Forget. That’s perfect because I don’t want to forget it. Ever.

After a year’s worth of endless behind the scenes planning and four days worth of running like a mad woman lifting boxes heavier than my Jillian Michael DVD-trained muscles should ever be allowed, WE DID IT. We pulled off an amazing Blog U 2015 Conference.

Really, there is no other way to put it. It might be important to note that my hair is now dyed blue, but more on that later.

For now, let’s just focus on the fact that BlogU was incredible. Full of hard-hitting blog how-to that you need to know and tons of co-blogger bonding, it was, in short, EPIC.

I could go on and on about the pride that soared through my soul reflecting in the heart-bursting moments when the Term Paper of the Year awards were read (really, this ended me) or when the faculty showed off their savvy brilliance schooling us during sessions. It was beautiful, the kind of beautiful that words don’t accommodate.

But let me focus on the highlight of the weekend–the #MiddleSchoolAwkward Night sponsored by Nickelodeon. It was aces. A gorgeous mix of poignant ungainly pre-teen memories coupled with the extreme coolness of ginormous scrunchies. The chance to throw-back to these years was a gift. A really, really fun gift. 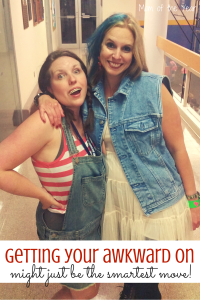 The thing is, back when we were in Middle School, we were awesome. We were fearlessly committed to our hideous neon accents and off-center ponytails/t-shirts. It was a Lifestyle of Awkward and we were its spokeswomen. It was fabulous in its tragedy.

We were a mess and we didn’t know it. God knows if our mothers actually knew it or they were just too traumatized by our appearance to give us a polite head’s up. Either way, we were rocking it. We were rocking it in the way that we so passionately believed in our NKOTB paraphanelia, we wouldn’t have believed any naysaying anyway.

For one night, we were our stunning awkward selves, and this is why Blog U has captured my heart. It’s a chance to embrace yourself for whatever and whoever you are–poofy tulle skirts included. See you in 2016, friends?

**This post originally appeared on The Mom of The Year as part of Nickelodeon’s® sponsorship of The Blog University. The series “100 Things to Do Before High School” premiered on June 6 @ 8pm on Nickelodeon.”**

Meredith Spidel blogs at The Mom of the Year, where she dedicatedly earns her title one epic parenting fail at a time, offering quick, relatable laughs for fellow parents of the world and all their empathizers. She has been part of several best-selling anthologies, including I Just Want to Pee Alone, I Just Want to Be Alone, I Still Just Want to Pee Alone,You Have Lipstick on Your Teeth, and Clash of the Couple. She has been a staff writer at Aiming Low and has been featured on prominent sites such as Huffington Post, BlogHer, In The Powder Room, Bonbon Break, and Scary Mommy. Meredith loves her role as the Executive VP/Operations Manager of The BlogU Conference and enjoys providing social media and consultation services. When she’s not breaking up fights over Legos and juice boxes, she remains fully committed to sharing a less serious look at the world of parenting. You can find Meredith on Facebook, Twitter, Pinterest, Instagram, and Google+.

Why Flying Home From BlogU Nearly Killed Me

The Story of My Good, Bad, and Ridiculous Weekend: BlogU15

So my mother is one of the hardest people to shop for in the history of f... END_OF_DOCUMENT_TOKEN_TO_BE_REPLACED

Why Flying Home From BlogU Nearly Killed Me

Every year I try to attend at least one conference where I will hone my skill of... END_OF_DOCUMENT_TOKEN_TO_BE_REPLACED

After the incredible response from our “Love, Loss and Forgiveness” ... END_OF_DOCUMENT_TOKEN_TO_BE_REPLACED

Sometimes I feel like I am so busy looking ahead at my calendar and thinking abo... END_OF_DOCUMENT_TOKEN_TO_BE_REPLACED

From time to time we all stress out about something. Whether it be school, work,... END_OF_DOCUMENT_TOKEN_TO_BE_REPLACED

The Weather and Your Mood

I just wanted to comment on how the weather can affect our moods. I am so happy ... END_OF_DOCUMENT_TOKEN_TO_BE_REPLACED