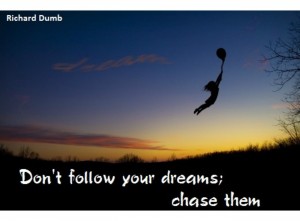 What do you want to do in life? The ultimate question:

You know how everyone asks you about your future plans as a high-school student? How they ask what you want to be and how you want to achieve it? I find it funny how they never ask you what makes you happy or what  would satisfy your heart. Some people are oblivious to the questions they ask and how much they can effect others… no matter the age. Asking a 35 year old what they want to be when they “grow up” will most likely not be the job they have at that moment. So why would you think that a 16 or 17 year old would know what they want to do for the rest of eternity?

I have been asked what I wanted to be when I grow up since I can remember. Of course, when you’re little, the question is to expect a silly answer. Most kids say astronaut or princess or fireman. When I was a kid, I always said hair dresser. Even when I was little, the question seemed to have a quick and simple answer. I said what I wanted, and I believed that what I wanted was reasonable and achievable. I never wanted to be a princess, I guess I was always considered to be a realist.

Up until about eighth grade, I always said that I wanted to be a cosmetologist. I thought about it as if I were applying for the job tomorrow. I considered how much I would make and how I would be able to care for a family. Recently, I took a trip to the Paul Mitchell school to tour it and get a feel of the place I would be learning from. I was instantly amazed. I thought that the school itself was very organized and it seemed to be a very efficient school. Even now I still want to be a cosmetologist!

My entire future is planned around being a cosmetologist. Just recently, I started thinking about places I would work after college. I started thinking about what would happen if I somehow didn’t become what I have always said I wanted to be. I thought about being a teacher, but after six months I realized that I wouldn’t be able to deal with the chaos and the school systems anywhere in the Charlotte area. I thought about being a massage therapist, but then I realized how many hours I would have to work and how many people I would actually have to touch.

Everything seems to always go back to cosmetology for me, and even though that is what I want to do with my life, because it seems to be something I would be good at, I still cannot help but feel that there is a deeper potential inside of me that could be even better than being a cosmetologist. Instead, I would want to be a writer.

I am only sixteen. I don’t know where I will be ten years from now, or two minutes from now, but I do know that if I waste my time thinking of what I could do rather than acting upon what I truly want to do, then I could waste a whole lifetime.

If there is something you want to do in life, no matter what age, you cannot hold yourself back from doing it. How many people can say that the job they have now is their dream job? It is never to old to dream a new dream and start a new chapter in your life that is completely different from the last chapter.

When the next person asks you what you want to do in life, no matter how old you are; tell them that it could take a lifetime for you to ever figure that out. Sometimes the questions are simple, but the answers are unfathomable. Follow you own dream, and don’t get lost on this roller coaster we call life.

We REALLY Were Awesome In Middle School: BlogU 15

PLEASE! Do your research!

So, I have a confession to make, and it’s kind of a silly/nerdy confession... END_OF_DOCUMENT_TOKEN_TO_BE_REPLACED

When Flying Makes You Ask: Are You Serious?

Recently I flew to Hawaii for spring break to go see my family. While on the ele... END_OF_DOCUMENT_TOKEN_TO_BE_REPLACED

My husband and I travel often and to many places. Sometimes our trips are week l... END_OF_DOCUMENT_TOKEN_TO_BE_REPLACED

My, How Times…And Traveling Attire Have Changed!

Back in the 80’s, when I took my first flight, airline travel was a BIG de... END_OF_DOCUMENT_TOKEN_TO_BE_REPLACED

I’m an Independent Director with Thirty-One Gifts, which means that I get ... END_OF_DOCUMENT_TOKEN_TO_BE_REPLACED

Hi there! I am Renee, hailing from New York, 28 years old, engaged to the best g... END_OF_DOCUMENT_TOKEN_TO_BE_REPLACED

Do You Know What is in Your Sunscreen?

With the rates of melanoma (the deadliest form of skin cancer) continuing to sur... END_OF_DOCUMENT_TOKEN_TO_BE_REPLACED

BlogU Taught Me About Myself

I’m sure that many others will blog about the amazingness that was Blog U 2015 t... END_OF_DOCUMENT_TOKEN_TO_BE_REPLACED