It’s always best to begin at the beginning. From the moment I decided to attend BlogU15 in Baltimore I was terrified and thrilled. The “bitch in my head” started to take over my brain and I did my best to quiet her. My flight would be leaving Florida at 6 am on Friday, which meant I needed to be awake at 3 am and in a cab to the airport by 4. Mornings and I are not the best of friends so when I sat straight up in bed at 1 am I decided it best to get dressed, add my last minutes things to my suitcase, and wait. That Tom Petty is spot fucking on because the waiting is the hardest part.

I watched a Harry Potter movie as the time ticked by. Because I was so afraid I

would sleep through my cab honking his horn outside my window, I actually ended up pulling out one of the most epic 24 hours without sleep my adult life has ever seen. I’m gonna blame lack of sleep that day on all the biggest unfortunate incident that followed. My complete clumsiness had no bearing on anything – yeah right, on a good day I’m like a baby giraffe learning to walk.

My arrival on the Notre Dame of Maryland campus was a bit of a blur. Except for this amazing story with Audrey, of Sass Mouth. Southern lady, my ass. I finally got to meet (in the flesh) a group of people I’ve been interacting with on the internet for about a year. These women, these glorious and brilliant women, were all I expected and more, as my online world collided with my real life. Surreal would be putting it mildly. I pounded some 5-hour Energy as I would not, could not, miss one second of the precious 48 hours I would have at BlogU. “Sleep is for pussies. I’ll sleep when I’m dead,” was the battle cry on loop in my maxed out brain. And I was doing it too. I attended classes that afternoon, went to dinner, then a party and a fabulous open mic reading. I watched as some of the greatest bloggers of my generation read their masterpieces aloud in front of large crowds. I watched Allen Ginsberg do a live reading in Greenwich Village 21 years ago. The stories I heard at BlogU made Ginsberg seem like a hack. The energy was palpable. My decision to stay awake was the right one. At least until it wasn’t.

When the open mic finished I found myself with my girl, Toni Hammer, as we took an elevator to our respective dorm rooms. As the elevator door opened I fished my small metal room key out of my neck lanyard. While stepping out of the elevator onto my floor I said, “Night, bitch,” and attempted to flourish my right hand in some sort of strangely odd wave. Blame it on the sleep deprivation, or the excitement of where I was and what I was doing, or the fact that I have the coordination of a bear learning the pachanga… my key flew out of my Vulcan death grip and was now airborne. Toni and I watched in slow motion as that silver flash flew through the air and fell… right into the small gap that separated the elevator from the floor. We heard a little ping as it settled at the bottom of the old dormitory. It was a one in a million shot made by the whitest of white girls. I sure picked the wrong time to do a LeBron James impression.

The hour that followed was spent sitting outside my locked dorm room door, waiting for a security guard to let me in. He was a portly fellow who didn’t seem to appreciate the humor of the whole situation. Imagine that? Finally, after a great deal of begging on my part he let me into my room, I fell into my bed and passed out.

The next day, between classes, I ran to the basement of the building hoping to find my sweet little key sitting there waiting for me. Even a broken clock tells the right time twice a day, but no. Lady luck had decided to flip me the finger as I was able to see my key, about 4 feet lower than where I stood. In the elevator shaft. Fuck. 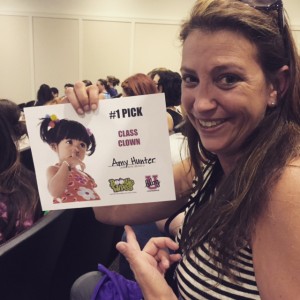 Campus security made it a point to let me know the elevator company would be coming by to retrieve my key long after the conference was over, so I kept my door unlocked for the rest of the weekend and, not to my surprise, all of my valuables stayed safe and sound. Although, I do think someone stole the chocolate out of my swag bag. Which makes total sense because chocolate and coffee are more valuable to bloggers then someone else’s laptop and cash money.

In 48 hours I made a million amazing memories. My sides and face ached from smiling and laughter. Surrounded by women (and a couple of brave men) I was in my element. These people got me. And I got them. The relationships I solidified in such a short period astound me. I even won the class clown award, which is very surprising because I’m a really serious person who rarely jokes around ever – Ahem.

My only complaint? There wasn’t enough time.

Until next year, BlogU. Adieu.

*This WIRL was originally published on The Outnumbered Mother 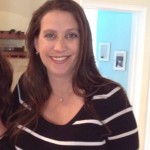 Amy Hunter grew up in the suburbs of Long Island singing Barbara Streisand hits into her hairbrush.  When she’s not writing her hilarity fueled parenting memoir as The Outnumbered Mother, she’s a Florida living, butt wiping, soccer team carting, gourmet chef attempting, tennis skirt wearing, non-tennis playing, self-proclaimed bad mamma jamma to 3 sons and a very understanding husband. You can find Amy’s work as a featured writer for Scary Mommy, The Mid, The Huffington Post, and In The Powder Room. You can find Amy on her blog, The Outnumbered Mother, Facebook, Twitter, Pinterest, and Instagram.

I Don’t Need a Huge Tribe, Just A Small Circle

BlogU Taught Me About Blogging and Powdered Alcohol

Don’t you love when someone points out to a pregnant woman that she looks... END_OF_DOCUMENT_TOKEN_TO_BE_REPLACED

Real is the New Sexy

How often are people true to who they really are? Social media glamorizes life i... END_OF_DOCUMENT_TOKEN_TO_BE_REPLACED

What Is It REALLY Like to Attend the Blog U Conference? Prompt: We want to hear ... END_OF_DOCUMENT_TOKEN_TO_BE_REPLACED

Unsubscribing from Emails – Quick and Easy!

We all know how it works, you’re looking online for something and want more info... END_OF_DOCUMENT_TOKEN_TO_BE_REPLACED

Chairs are always a fun makeover to tackle because you can usually find them for... END_OF_DOCUMENT_TOKEN_TO_BE_REPLACED

Over the last year my wife and I have attempted to emphasize the importance of m... END_OF_DOCUMENT_TOKEN_TO_BE_REPLACED

Joanna Gaines has found her way into the hearts of many HGTV lovers. She&... END_OF_DOCUMENT_TOKEN_TO_BE_REPLACED

Whether you are new to the dating scene or are in a long-term relationship, one ... END_OF_DOCUMENT_TOKEN_TO_BE_REPLACED