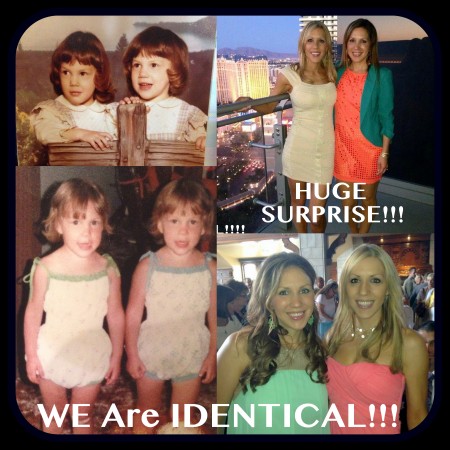 Ok yes, I knew I was a twin my whole life, but for the first 33 years, we were told we were fraternal.

First question EVERYBODY asks when I mention that I have a twin sister is – Are you identical or fraternal? My response was always that we are fraternal, but look VERY similar! We were always told that my mother had fraternal twin girls because we each had our own sac in utero. Every fraternal twin will have their own gestational sac in utero and this is because each egg was fertilized with their own sperm. So, fraternal twins have different DNA. The doctor that delivered us just assumed we were fraternal because we came from different sacs.

My twin and I have always looked identical though. Same height, body shape, eye color, hair color, nose, eyes, feet, hands, etc.. Even though there were slight differences, most people knew right away that we were twins.

One of my friends, who is a mom of twins, told me she had her twin girls genetically tested to be certain they were identical because each of her twin girls had their own sac. So, I did some research and found that identical twins can have their own sacs and it is quite common! I ordered the genetics test and had one kit sent to Ohio, where my sister lives, and one to North Carolina where I live. We swabbed our mouths, sent back the kits, and waited not-so-patiently for 2 weeks. 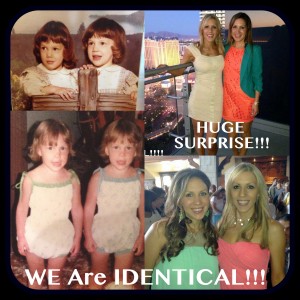 They sent the results over email, so when I saw the email come through, I called my sister immediately and read the email to her over the phone. We were beyond shocked and excited that the results came back 99.9% sure we are IDENTICAL! Both of us cried. I can’t explain why, but it is crazy to think you have the same DNA as someone else! And for 33 years we were answering the identical/fraternal question WRONG!

What is it really like to be me? Often times I wonder, does anybody care? But th... END_OF_DOCUMENT_TOKEN_TO_BE_REPLACED

What To Do When You Have the Boss From Hell: Quit!

When you have the boss from hell, don’t stick around hoping things will g... END_OF_DOCUMENT_TOKEN_TO_BE_REPLACED

After the incredible response from our “Love, Loss and Forgiveness” ... END_OF_DOCUMENT_TOKEN_TO_BE_REPLACED

Do you know the REAL reason that American’s celebrate the 4th of July? We&... END_OF_DOCUMENT_TOKEN_TO_BE_REPLACED

What do you want to do in life? The ultimate question: You know how every... END_OF_DOCUMENT_TOKEN_TO_BE_REPLACED

If you play any sport, you know that nothing beat hitting the game winning shot ... END_OF_DOCUMENT_TOKEN_TO_BE_REPLACED

Do You Know What is in Your Sunscreen?

With the rates of melanoma (the deadliest form of skin cancer) continuing to sur... END_OF_DOCUMENT_TOKEN_TO_BE_REPLACED