I have identical twin sons, Tai & Jay, now all grown up in their 20’s, but it really does seem like yesterday they were those cute little men running around amusing each other and us! So twins are on both sides of the family and the story says twins should skip a generation, but not in my case. It’s funny because in my family – I was the youngest of 4 girls, and my 3 sisters each had a baby the year before I had twins, and 2 of those babies were born one month apart, so we used to call them our twinnies – until the real twins arrived….

My boys were my first babies, born full term for twins, 38 weeks and were 5 pounds 5 ounces and 5 pounds 15 ounces – so little, but a good weight for twins. I won’t bore you with the details, but it was natural and all over in 2 hours and 40 mins from when I was induced to when I was holding the second bub. I had a bet with one of the nurses that I would be done by 12 noon and the second baby was born at 12:03 pm, but I had to stop mid birth as he was the breach baby and had his arm up over his head and could have broken his collarbone if born that way. So the Dr. made me stop to move his arm down before I could start again – so I won on a technicality! As they were my first babies, I hadn’t experienced the shifting and moving and growing and changing in my body before, but it was pretty dramatic. I assume it is like that the 1st pregnancy for every female. Two things I learned, seriously moisturize your stomach to avoid or minimize stretch-marks and make sure if you are going to breastfeed, to literally toughen your nipples up so they can cope with feeding babies all the time. I used Lanolin and it worked really well and was cheap and you could get it anywhere – but I’m sure there are more ‘modern’ versions that do the same thing – I also found topless sunbaking worked well (in the privacy of my backyard ☺ ).

I learnt very quickly that when it came to feeding them (I breastfed) it was better for me to wake them both up to feed at the same time so at night I could actually get some sleep. Initially one would wake up, I would change and feed him then put him down and jump back in bad to get some sleep, then the other would wake up this would happen all night– so to save my sanity I started waking them both up and feeding at the same time – I was a much nicer person when I got a bit of sleep! I

used an elbow cushion to support my arms when feeding them, when little they were facing into each other (toes touching), and as they grew I turned them out so their feet were under my arms, not one kicking the other in the head! With single bubs you are meant to swap boobs each feed, but as there are two, I swapped daily as one did eat a bit more than the other – I didn’t want to walk around lopsided. My husband is Fijian and I spent 5.5 months of my pregnancy in Fiji and we had a traditional basket woven for when the twins arrived – I figured they had spent soo much time together in my belly it would be traumatic to separate them after birth, so they slept in the same basket until they grew out of that at approximately 3 months, then I put them in a single bed with cushions around so they couldn’t fall out.

Due to the size difference, when born they looked pretty different, very easy to know who was who. But as they grew, about when they were toddling around they had gorgeous ringlets/mini afro hair and they were about the same height and weight. It became very tricky working out which was which – I knew (most of the time), but others couldn’t tell. Looking at photos now I struggle to work it out! I used to dress them in very similar clothes, but different colors and that is usually the way I tell them apart now to be honest.

They were very cheeky at that toddler age, they used to run in opposite directions and I had to assess the risk and run after one then turn around to catch the other – funny when in safe surroundings, but something I think they instinctually know to do, so be warned! A strange thing we worked out with our boys is that if one injured himself, within either a couple of hours or days, the other one injured himself too – it still happens now and they are in their 20’s. We don’t know why and have discussed it with them and they didn’t realise, but yet it still happens. When they were babies, they had their own language – babies seem to understand each other in general, but other babies couldn’t understand our two, thankfully they grew out of that pretty quickly as I knew other twins that didn’t for years. Tai & Jay have a very strong connection, but are very different people – have been since they started school, but the connection still is strong. They argue like cat and dog, but will defend each other if someone outside the family says anything – and I like that!

My doctor had already told me that it was highly likely I would continue to have twins or possibly more, so when I was pregnant the second time I was terrified I was having triplets – I have two hands and a set of boobs, but 3 babies at once – oh noooo. So when I found out I was only having one I was a little disappointed, as strange as that sounds. Turns out baby No. 3 and 4 have such huge personalities it is like having the extra people in the house anyway! In my opinion, twins are awesome. When they are babies you just need to be super organized and have a good routine and for me, things went smoothly, thankfully. And when they are a bit older and interactive – they have a permanent playmate, so you can actually get some stuff done while they are playing together. Through school I ensured they were in separate classes so they didn’t depend on each other, but they knew they had support if needed, especially in the first year of schooling. I felt it was important to have that support, but not be too dependent on each other. 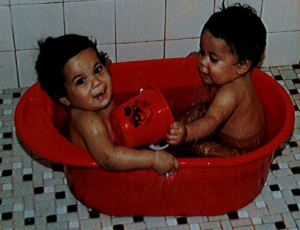 In the early days of twins you do need support, especially while working out your routine, so ask for help as most people are totally fascinated by twins, and that makes shopping sometimes very long due to all the lovely comments you will receive. Remember, keep calm – like all babies they can smell the fear on you, it’s just double trouble with twins.

So, if you are a new twin mum or a soon to be mum of twins – congratulations! All Mums are super special, words cannot express the feeling of bringing a baby into the world, but having Twins, well I think we are extra special.

I went to BlogU this weekend, one of my most favorite weekends of the year becau... END_OF_DOCUMENT_TOKEN_TO_BE_REPLACED

If you are like me (someone who loves food, especially snacks) you probably have... END_OF_DOCUMENT_TOKEN_TO_BE_REPLACED

Looking for a Quick and Easy Way to Collect Addresses for Party Invites?

Have you ever spent HOURS trying to collect addresses or other contact in... END_OF_DOCUMENT_TOKEN_TO_BE_REPLACED

Whether you are new to the dating scene or are in a long-term relationship, one ... END_OF_DOCUMENT_TOKEN_TO_BE_REPLACED

I am constantly trying to find ways to trim our family budget.  About twice a ye... END_OF_DOCUMENT_TOKEN_TO_BE_REPLACED

It Isn’t Time for That

Regret. I am only a few words into typing this and you got a lump in your throat... END_OF_DOCUMENT_TOKEN_TO_BE_REPLACED

You’ve done it, you know you have. You’ve completely butchered, or e... END_OF_DOCUMENT_TOKEN_TO_BE_REPLACED

Two weeks ago at Thirty-One’s Leadership Council (where the top 25 women ... END_OF_DOCUMENT_TOKEN_TO_BE_REPLACED

I had the privilege of being invited by T.v. Williams to be on his Famous Podcas... END_OF_DOCUMENT_TOKEN_TO_BE_REPLACED